August 31, 2010
Have you read/watched Robinson Crusoe? No? Cast Away (Starring Tom Hanks) at least? If you haven’t, do it. Both are wonderful and so is Life of Pi. 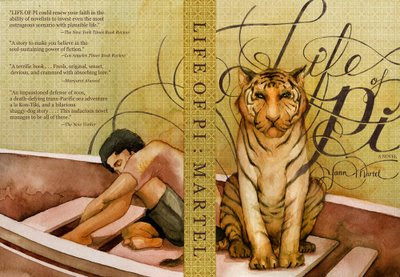 Author: Yann Martel Time/era of story - 1960's-1970’s Type: Adventures Journal
I wanted to read a sea adventure and that is when a friend of mine suggested me to read this book. This is a simple tell-tale about the survival of a 15 year old kid in sea for 227 days in a small life boat with some extra ordinary company of the wild animals – Richard Parker, a Tiger; a female Orangutan, a zebra and a Hyena.
The book starts of detailing his life as the son of a zoo owner in Madras, his explorations and affiliation to Christianity and Islam. Then when his family plans to move to Canada, things go awry and a sad shipwreck afflicts killing them all. Piscine Patel or “PI” manages to escape in a small boat only to find out later that he has company, dangerous company – wild animals. From here on, it is struggle for the survival, survival of the fittest.
It is a heart touching book, though the details would bore in the middle but the author manages to beautifully explain the thoughts of a person who has no option left to live and how the sole will to survive helps him surmount the extra-ordinary troubles. Yann Martel makes you step in the shoes of PI and think what you would have done? The desperate measures to survive from drinking salt water to eating the fecal matter of the Tiger definitely give you Goosebumps.
There is an interesting conversation with the two Japanese in the final part of the book. Since the book assumes the autobiographical tone of the adventures of a kid, it becomes gloomy and drab at more than one occasion, but by then you will be in the grip of the author and would move with the flow of the book.
If you are an avid reader, looking for something different, this is definitely a book to go for.
Trivia:
Yann Martel was awarded ‘Man Booker Prize’ in the year 2002 for Life of Pi. A movie is being made, based on this book with the title same as that of the bookand it is being directed by Ang Lee. (Source:IMDB). I just hope the movie turns out to be worthwhile watch.

Anonymous said…
I think I have read this book. I kinda liked it. Any idea if the author has written other books as well?

MuddassirShah said…
Buddy,
AFAIK , another of his book released this year around April- May.
It is titled "Beatrice & Virgil". I haven't had the luck to read the book yet. Once I am done reading it, you will find a review on this blog
31/8/10

MuddassirShah said…
I am sure everyone who reads this will connect with some part or the other.
Mayank, have you had the chance to read his second book ?
31/8/10

Anonymous said…
Hey Thanks for review.. I always wanted to read this book, heard about it from many friend.. I will added it to my list.
1/9/10

Shruthi Srinidhi said…
This adds another book to my "To-read" list. Good Job :)..Keep those reviews coming in..they are helping me set my bookshelf:)
2/9/10

MuddassirShah said…
unfortunately, these reviews are helping u just set your bookshelf. When you cross the limit you will start shelving these books. Start Reading them
2/9/10

Sakhi Shah said…
I've heard many positive reviews of this book...definitely taking it from the library now, next week. :)
11/9/10

MuddassirShah said…
Sakhi,
Yes it is a good one and I ll keep waiting to see your review on this book
11/9/10

Anonymous said…
This comment has been removed by a blog administrator.
7/10/10

Anonymous said…
You nicely summed up the issue. I would add that this doesn’t exactly concenplate often. xD Anyway, good post…
11/11/10

Anonymous said…
This article was extremely interesting.financial help for college
13/11/10

Popular posts from this blog

April 10, 2011
I started pessimistically with Windows vista and as my mom says, things go from bad to worse when you are pessimistic. Everything I to run on my vista laptop gets screwed up and the error? The one and only "COM SURROGATE HAS STOPPED WORKING" I did my bit of research on this topic and luckily didnt have to look far. The issue was with the NERO softwares on my system. The easiest solution was to uninstall Nero but, that is not an easy affair. So this is what i did : Rename the file C:\ProgramFiles\Common Files\Ahead\DSFilter\NeVideo. ax to NeVideo.ax.bak and NeVideoHD.ax to NeVideo.ax.bak  Please Note that these files are the root cause for the issue, so you can rename them any which you like it. Once renamed the issue is resolved and can have relief for a long time. Also note that this may be one of the reasons along DivX and other softwares. For a detailed solution read this article . If you like my post, you can   FAVE it here
29 comments
Read more

Motives and Actions ...A short story

June 16, 2010
He entered the village limping; his entire weight supported by a wooden staff that appeared to be in a shape bettered by his own. The sun was retiring for the day and so were the peasants. Young kids returning from school and the children dirtied from the farm work were running around carefree. The police constable along with some young men was trying to force the children back to their home lest the kidnapper make an appearance and abduct the children. The kidnapper had terrorized the village for a few months now, holding children for ransom until defrayment.  No one had ever seen him and that made the matters worse. The police constable was under a lot of pressure to catch the kidnapper and he wanted to prove his worth. The constable had this hunch. Anyday now the kidnapper will make his move and the constable will catch him. The prize for the catch was more than the pride at stake. The reward money to bring in the Kidnapper was handsome plus a photo published in the local newspape
33 comments
Read more

January 28, 2008
Of late, I have been fascinated with tongue twisters. They are quite a challenge, at times they are stress busters or at times they may add the stress load. I have done my bit of look out and this is wat I found: Wikipedia states: "A tongue-twister is a phrase that is designed to be difficult to articulate properly. Tongue-twisters may rely on similar but distinct phonemes (e.g., s [s] and sh [ʃ]), unfamiliar constructs in loanwords , or other features of a language.The hardest tongue-twister in the English language (according to Guinness World Records ) is supposedly The sixth sick sheikh's sixth sheep's sick. William Poundstone claims that the hardest English tongue twister is "The seething sea ceaseth and thus the seething sea sufficeth us." [1] " I found these interesting, Betty Botter had some butter, "But," she said, "this butter's bitter. If I bake this bitter butter, It would make my batter bitter. But a bit of bet
40 comments
Read more

March 01, 2011
Thomas Jefferson, 3 rd President of USA(1801-09) and author of the Declaration of Independence says  “ A democracy is nothing more than mob rule, where fifty-one percent of the people may take away the rights of the other forty-nine ”. A thought provoking statement with lot of depth to it. It just doesn’t talk of majority in the parliament but about all those wrong-doers who wish to grow their wealth at the expense of everyone else. Right to Information Act, was brought on the table and made a reality just to counter such elements of the society. RTI guarantees transparency of Information that is vital to its functioning and to contain corruption. In other words, it aids to hold governments and their instrumentalities accountable to the governed. We will try and understand more about the SCOPE of RTI, What information is accessible and what isn’t. SCOPE of RTI The following Governments, Organizations  and bodies are covered under RTI and are subject to it.   Central, State
18 comments
Read more